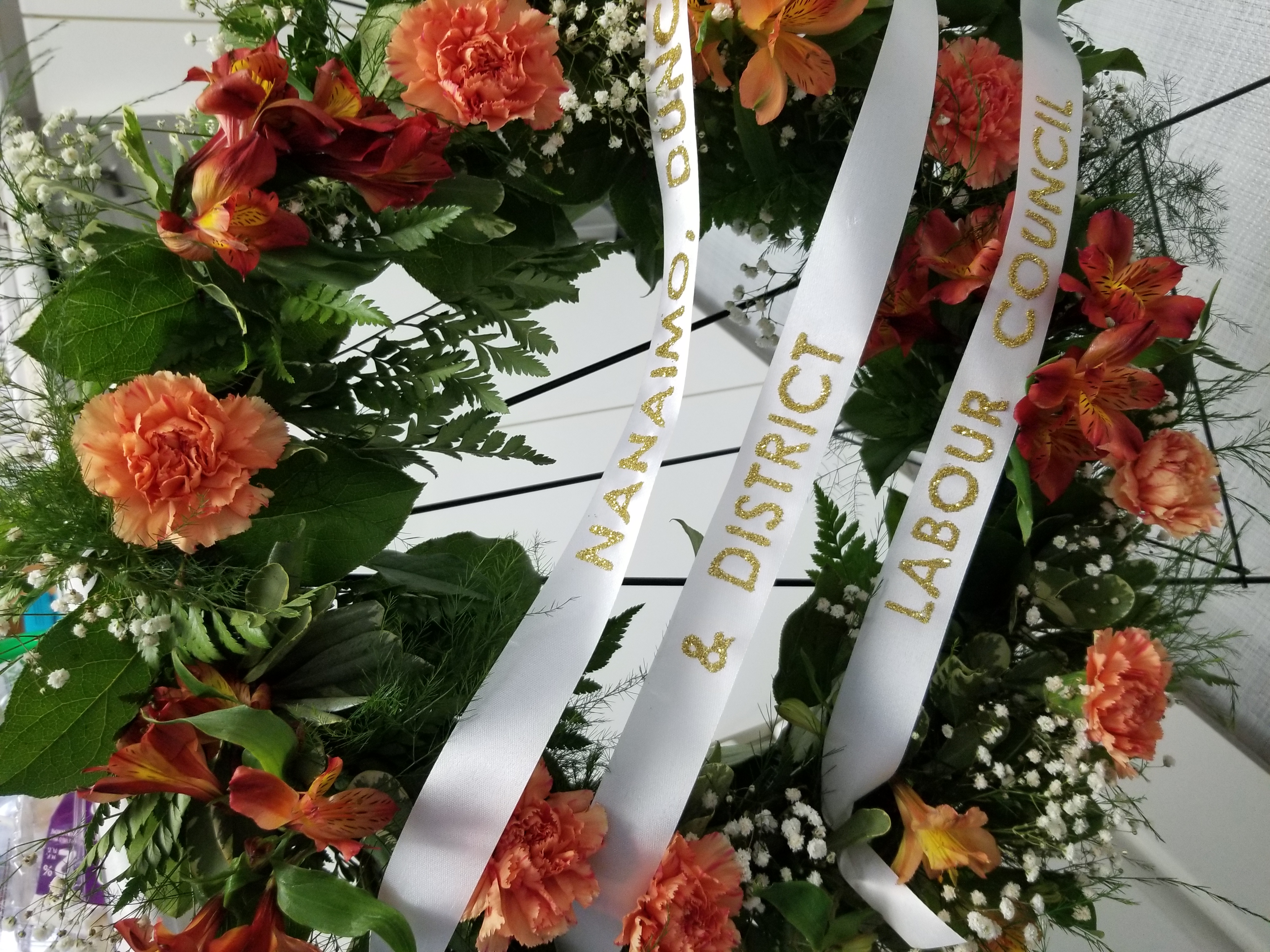 The enduring April 28th call to “Mourn the Dead; Fight for the Living” could not be more urgent on this National Day of Mourning. 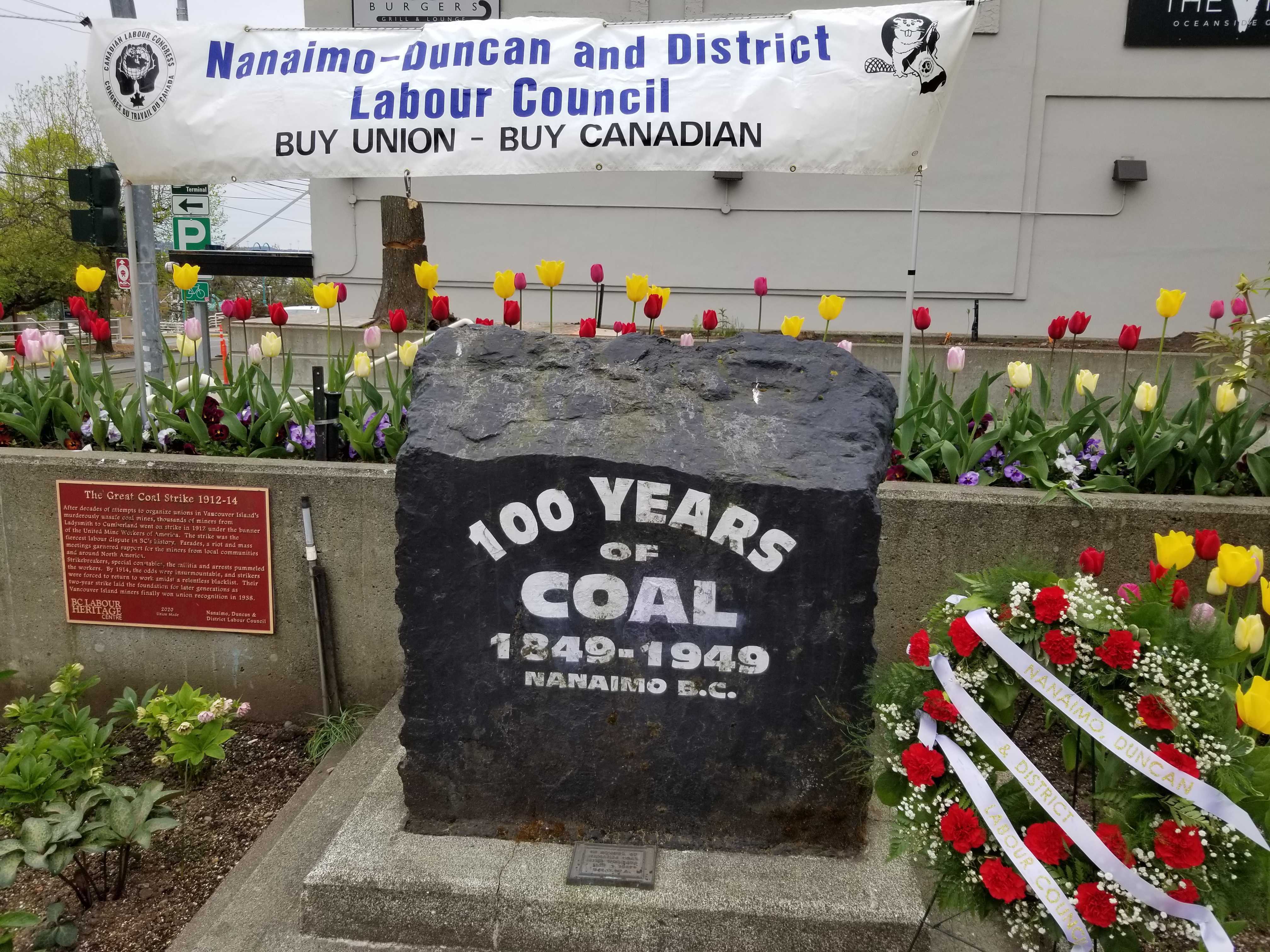 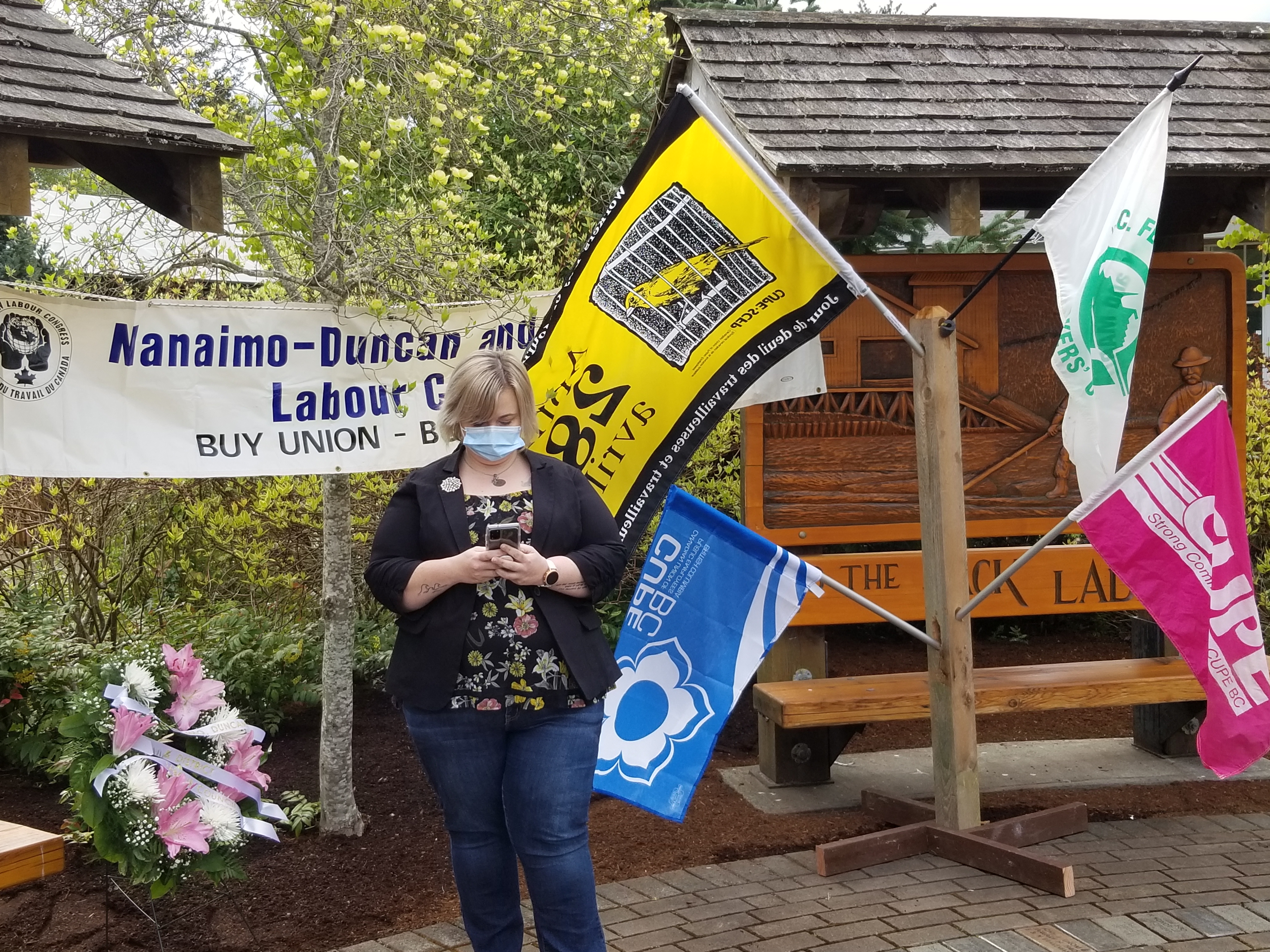 As in 2020, the Nanaimo Duncan & District Labour Council marked the 2021 National Day of Mourning in physically distanced wreath laying ceremonies throughout the region. 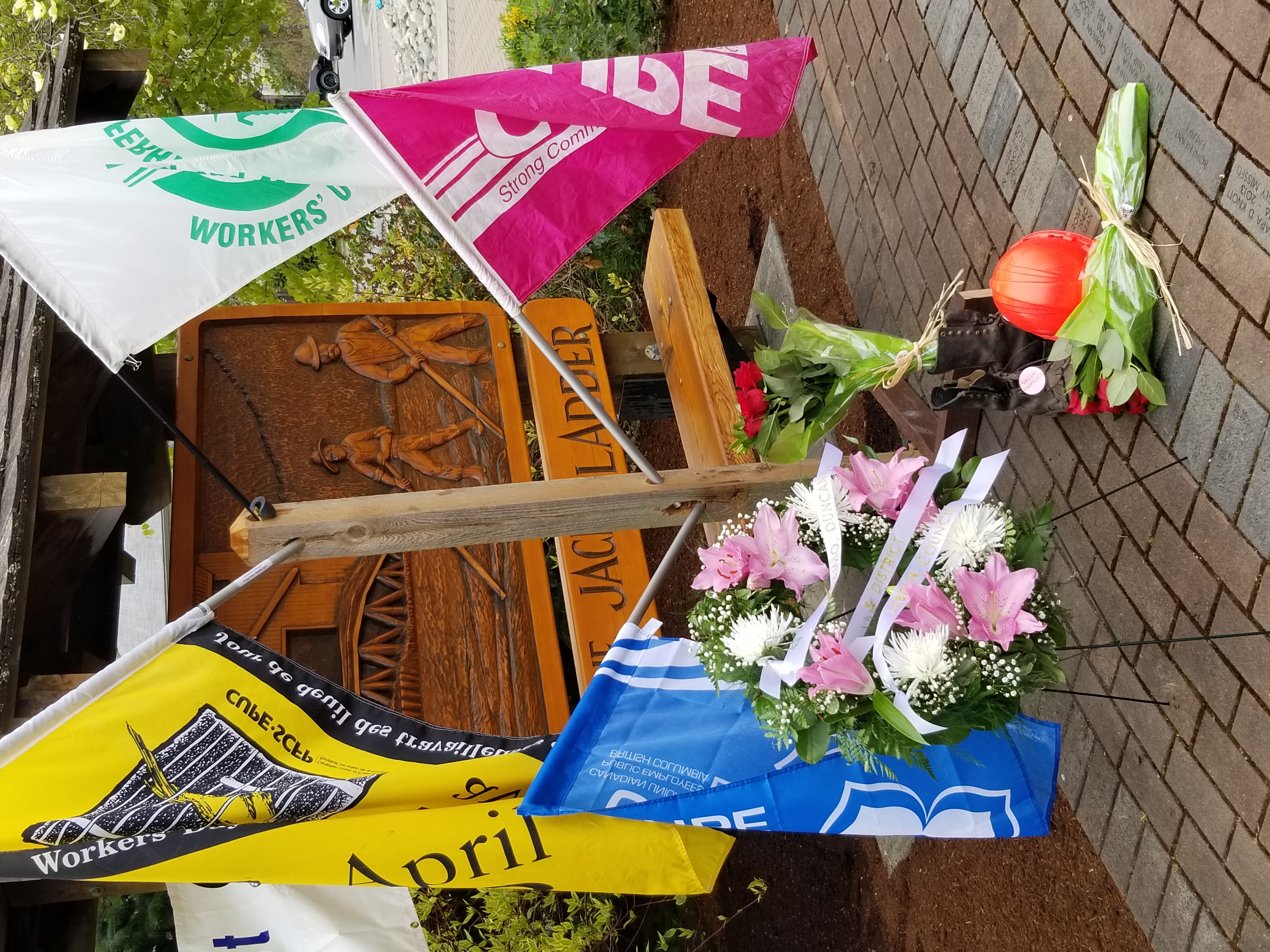 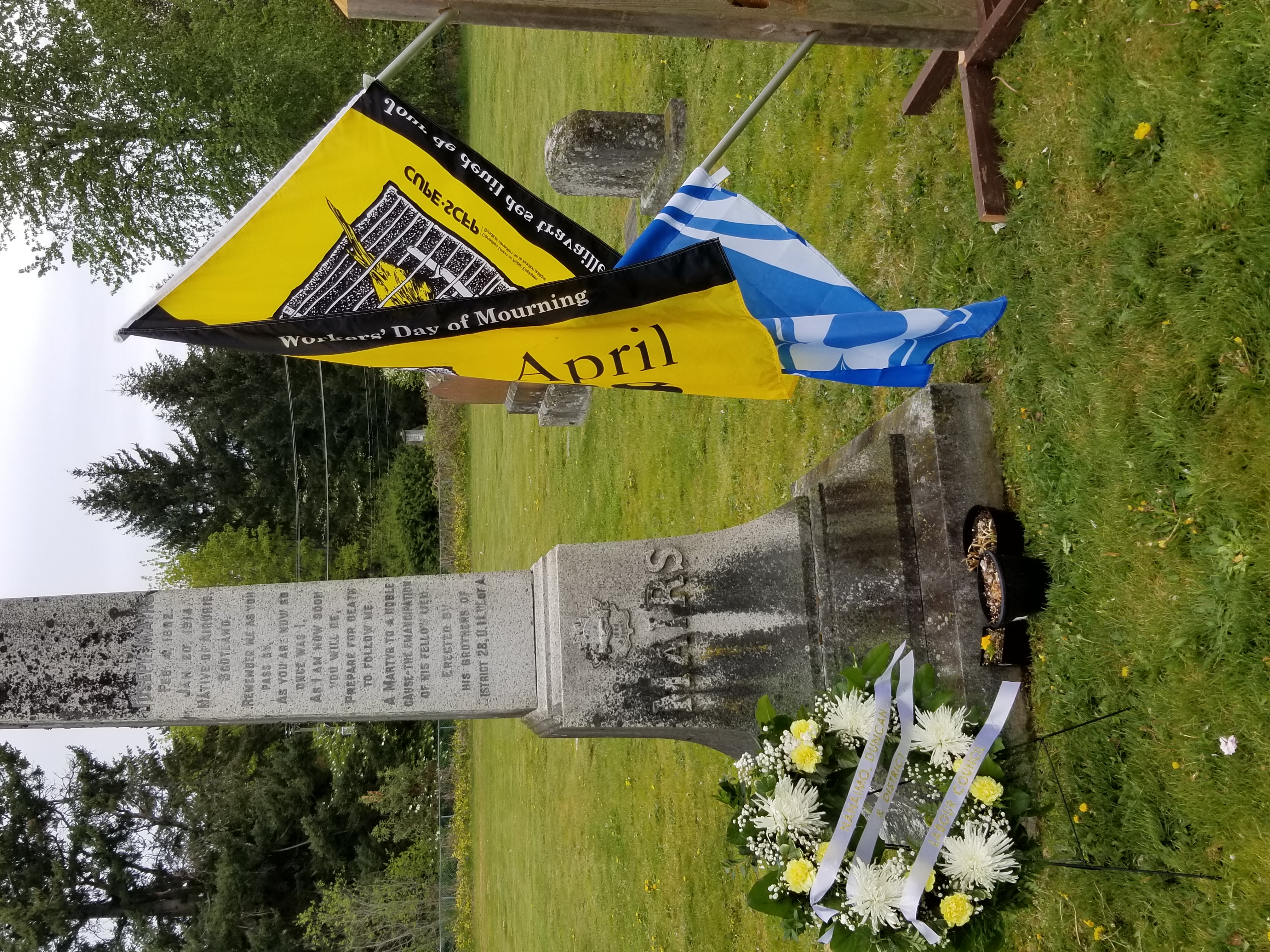 Every year, approximately 1,000 Canadian workers and more than 2.7 million workers around the world die because of something that happens at work. In 2019, the most recent year for which statistics are available, there were 925 accepted workplace fatalities and 271,806 accepted lost time claims in Canada. Globally, workers are routinely denied even basic health and safety protections, resulting in millions of deaths each year from work-related injuries and diseases.

In BC, WorkSafe noted the deaths of 151 workers in 2020 and this year Vancouver Island has already seen several workers killed on the job.

The pandemic has exposed the lack of protection for workers. Evidence from across the country, and indeed around the world, shows the virus is spreading at work – not only in health and care settings but also in factories, farm work and food processing, warehouses, schools, offices, transportation and other sectors. Workers have had to fight for access to protective equipment, COVID-safe practices at work, paid sick leave and respect for their basic health and safety rights.

On this National Day of Mourning, we call on Employers to:

On this National Day of Mourning, we also call on Federal, provincial and territorial governments to:

Canadian workers have faced impossible choices in this pandemic. Without access to adequate paid sick days, workers have been forced to choose between going to work sick or not putting food on their own table.

An estimated 58 percent of Canadian workers don't have access to paid sick leave through their employers, according to a report by the Decent Work and Health Network. That number rises to 70 percent among people making less than $25,000 a year. Only two provinces guarantee any annual paid sick days: two days in Quebec and one day in PEI. Workers in the federal jurisdiction are entitled to three paid sick days a year. This failure puts us all at risk and is undoubtedly prolonging and deepening the impacts of the pandemic.

At its Centenary Conference in 2019, the ILO committed to include safe and healthy working conditions in its framework of fundamental principles and rights at work. That commitment has yet to be implemented due to resistance by certain government and employer representatives to the UN body.

Making occupational health and safety a fundamental right at work — on par with the prohibition of child and forced labour, discrimination at work and the right to join a union, bargain collectively and ultimately to take strike action — wouldn’t solve every problem at work. But it would make employers and governments more accountable when they fall short and a working person suffers, often leaving grieving parents, children or partners. It would signal that workers have the right to refuse unsafe work, strengthen the hand of inspectors and drive better health and safety standards along the world’s supply chains.